So much for my ten-day silkworm challenge. In a ten-day album challenge it would have been like running out of energy on day four on the Bob Dylan side of The Concert for Bangladesh.
“It was raining from the first and I was dying there of thirst so I came in here.
And your long time curse hurts but what is worse is this pain in here.
I can’t stay in here.
Ain’t it clear?
That I just don’t fit.
I believe it’s time for us to quit.
When we meet again, introduced as friends, please don’t let on that you knew me when, I was hungry and it was your world.”
The presence of great art uplifts us. Everyone is poisoned and stabbed dead on the stage in the last scene of Hamlet.
While we are breathing deeper with straighter backs.
The past few days have been so dismal. No wonder the silkworm eggs didn’t hatch.
I don’t blame them.
“If I were an alien passing by earth I would lock the spaceship door.”
I found myself praying while that stinking pile of orange shit held up the Bible. “One big bolt of lightening please.” And let the Bible gently fall to the ground miraculously open to the Sermon on the Mount.”
Anyway… the silkworm eggs are hatching.
Not all of them, so I will wait until tomorrow morning to start feeding them.
They are pepper-sized little furry babies looking for some thinly sliced gourmet mulberry leaf, chilled to just below room temperature with some Bach Cello Suite playing softly in the background.
They will take four breaks in their mulberry feast in the next 28 days. Their belts become too tight and they need to open it a few notches. (They actually shed their skins four times.)
A feather is needed to gently round up the babies so they don’t get buried beneath the sliced mulberry and suffocate or wander off to a place where they can’t find any mulberry leaf.
They may dislike the interference from a higher authority.
Some of them may hold resentment. Most of them just want to get on with the business of eating. I haven’t witnessed any antifa, silkworm identity issues, victim mentality amongst the silkworms on my trays.
Perhaps because I use a beautiful pheasant feather and not a brutal finger to keep them from hurting themselves.
The beauty in the woodblock print gently brushes the new born silkworms onto paper where they can be taken care of. Note the Japanese honeysuckle blooming in the background. The first silkworm eggs hatch when the honey suckle starts to bloom I noticed years ago.
I’ll stop the Animal Farm stuff now. I know where it leads.
A boiling pot of water.
Hee hee hee…(evil laughter.)
And I am the bourgeois puppet master...after some bourgeois silk to satisfy my melancholic appetite for long tedious processes at the expense of sentient creatures. 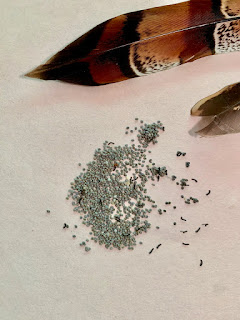 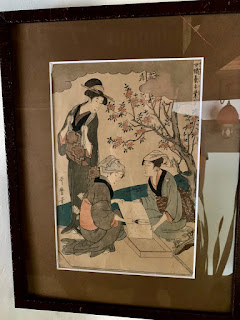 Posted by Bryan's Japanese Textiles at 20:48