The second type of katagami stencil carving is callled, dougubori (tool carved). The stencil carver makes the punch-like tools in the desired shape. The pattern is drawn onto the paper and five additional layers are fixed together with a paper cord passing through  holes near the top edge of the papers. The pattern is sometimes purposely slightly warped to make it easier on the eye.  Figurative motifs are used as well as abstract geometric patterns. This technique is usually impossible for katagami enthusiasts to produce as the tool making and maintenance is an additional art in itself.

These stencils are usually used as a negative. What you see is what you get. The white spaces stay white on the cloth because they are rice-paste-resisted. They are used with chemical dyes for the most part. The dye has to be cold or the paste will melt. Traditionally these patterns were used with indigo. 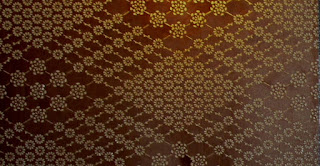 I can't sleep with too much excitement over my trip last week to Kyoto and Ise to visit textile related studios and museums.

The trip mostly focused on Katazome.

There are five basic categories of stencils. Your eyes may glaze over reading that but stick with me through  these next few blogs.

Kiribori is the oldest technique. It is carved with a semicircle awe like this one.  The carvers make their own tools.  The size of the semicircle determines the size of the hole. The tools increase in minute fractions of diameter. 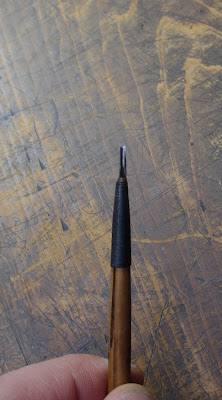 The tool is held carefully at a 90 degree angle to the stack of six persimmon tannin papers (You can see them bound together with  the white paper threads.) and a slight twisting action against a deerskin thimble of sorts drills/cuts the hole. 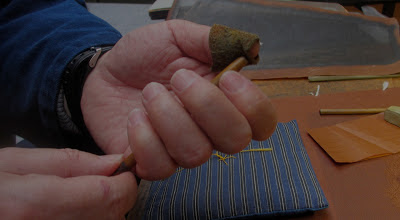 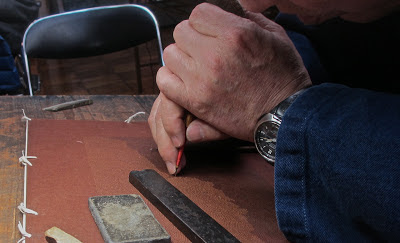 It is supposedly the most difficult of the five techniques. There were once hundreds of Kiribori stencil cutters. There are only a few left who work at this level. We were particularly interested shark skin patterns this time and the master carver was kind enough to give us a private demonstration.

Rice paste is scraped over the wet stencil and later dyed, then the paste removed. The shark skin pattern was usually dyed with indigo. The stencil carver explained that there were no indigo craftsmen capable of dyeing this pattern left.
Chemical dyes like this purple are used. 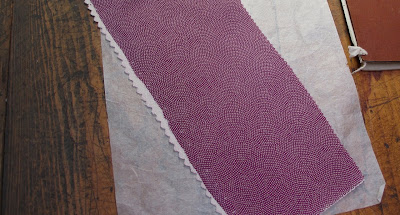 Here is a copy of the stencil that made this pattern in the process of being carved. The whet stones for the carving tools are sitting on the paper. 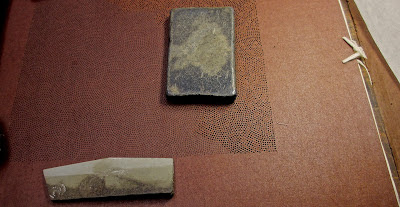 There were dozens of variations of this shark skin pattern in the Edo period.  Samurai would order a stencil that he had exclusive rights to use for his formal wear. Later as the merchant class evolved they copied the class they sought to emulate with similar patterns and stencil dyed kimonos became common and the production increased exponentially for several hundred years. There are hundreds and hundreds of thousands of different patterns. The artistic quality varied however, the ingenuity and skill levels of the artists/craftsmen is still mind-boggling. With so few artisans working on these and the almost disappearance of kimono in the last 70 years the originality and artistic quality has plummeted. It seems a certain critical number of artisans is needed to sustain the art. 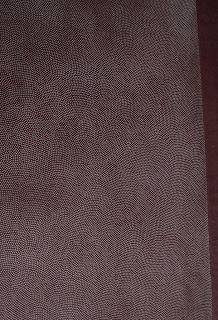 Many of these stencils are copies of old stencils from the 19th century. The old stencils are placed on the paper and the pattern is stencilled on to new paper using a powder-puff type brush with thickened ink. The black portion of the stencil is then carved out. That is rather depressing to witness, however there are simply no people with sufficient design, carving and drawing skills left on the planet to come up with designs that are near the level of those from pre-industrial times.

Different sizes of the carving awles can be used to create these kind of patterns:

The artisans are desperately trying to keep these breathtaking skills alive by thinking of new applications for the stencils. Interior design goods are one area they are focusing on. This also gets a little depressing. The history and skill and artistry of these stencils is not respected with the design level of the products they are coming up with. Are there any rocking genius designers out there that could do these stencils and their history justice? 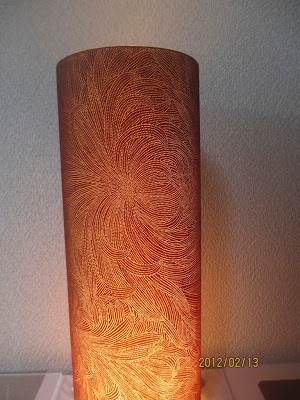 The idea of creating a stained glass effect by sandwiching the stencils between glass on doors was not bad. The doors they had designed for the project were horrible shellacked nightmares. There is a huge multi-gazillion yen building dedicated to showing off these beautiful stencils and their history. There are a dozen government workers forlornly walking around. Can't they find a designer and carpenter to make a decent solid Zelkova wood door? Something elegant or stately or even run-down and shabby chic perhaps? Something that has just a smidgen of poetry and humanity in it's design? It just makes you want to tear your hair out and scream in desperation. 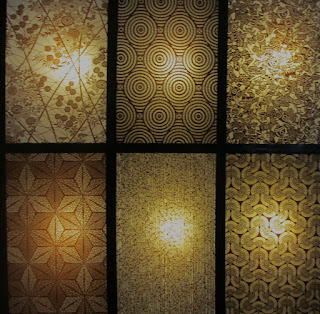 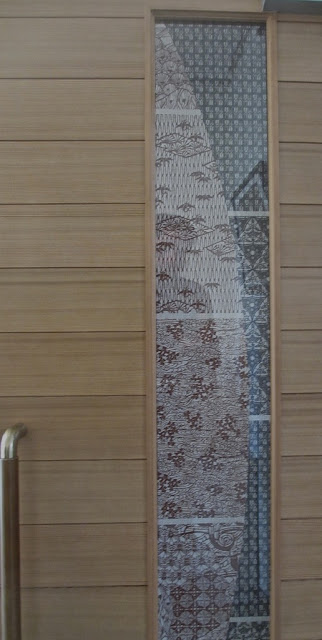 The peace and quiet and breathtaking beauty of this Zen temple in the countryside quieted my angst. Tanaka san and I had the entire complex to ourselves on a Saturday afternoon. Heaven. 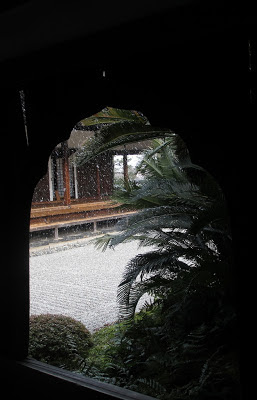 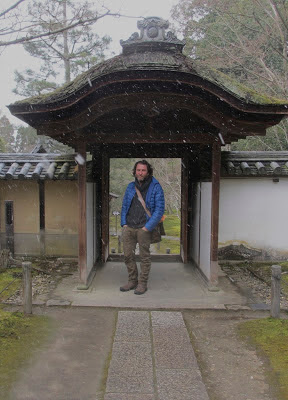 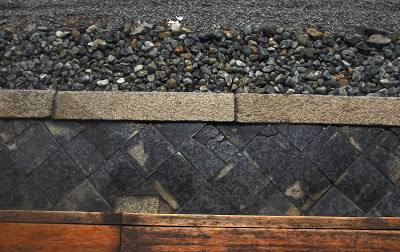 The classes at the house focus around Japanese textiles, however the two big Scandinavian looms get a lot of attention. They needed to be treated with more respect so I started teaching the students to spin wool and weave blankets. I follow Nancy Zeller's Long Ridge Farm blog and am always impressed with her wonderful life and skills.
http://longridgefarm.blogspot.jp

Instead of sourcing wool from the craft store in Japan I introduced my Japanese students to Nancy's world and ordered a huge box of wool. She included pictures of the donor sheep that will make the whole spinning and weaving and finally having the blanket so much more meaningful. Thank you Nancy. We 'prosumed' slightly more than we consumed this time around.

I have very little experience with wool so in order to not make myself look bad in front of the students tomorrow I spent the day spinning some of the roving she sent. It spins beautifully. 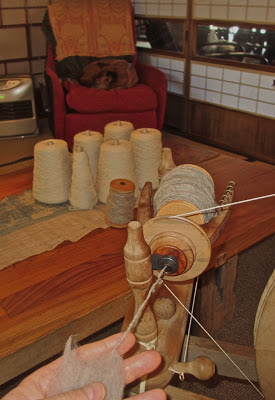 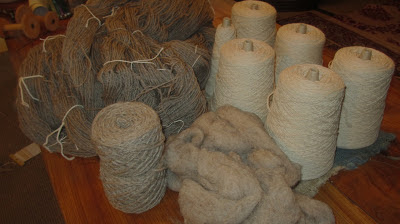